So I recently finished Indomitable: The Life of Barbara Grier by Joanne Passet and at last I understand why those Naiad Press books ol’ Babs put out had that distinctive look. Barbara, it seems, was your classic lesbian cheapskate; she would do anything to maximize the number of books she could get in a box, and that included squishing more words on the page than is compatible with visual pleasure, not to mention legibility.

Below we have pages from two lesbian novels. Figure 1 is a Naiad from the 80s and Figure 2 is an upscale lesbian hardback from the new millenium. 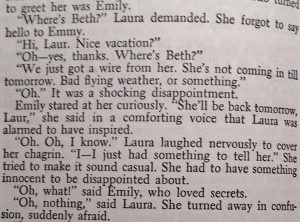 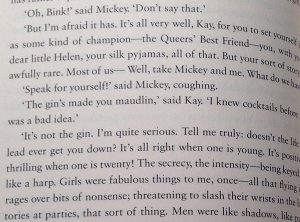 As you can see, the words are crowded onto the page in Figure 1 in a way that would make any self-respecting graphic designer cringe in horror. The leading is laughable. As if to compensate, the type is oddly large. Contrast the comparatively generous leading in Figure 2, and the way the slightly smaller font actually makes it more readable.

The other thing the Grier bio got me thinking about is how many important lesbians have been named Barbara. Below is a quick cheat sheet to distinguish Barbara Grier from two of her notable contemporaries. 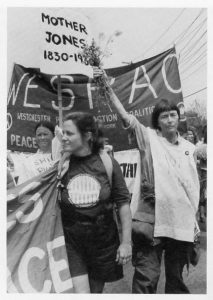 Barbara Deming
July 23, 1917 – August 2, 1984.
Came out: when she was sixteen.
Main Cause: Non-violence.
Hung out with: Lotte Lenya, Daniel Berrigan, William Kunstler, Edmund Wilson, Fidel Castro, Grace Paley.
Lovers: Norma Millay (Edna St. Vincent Millay’s sister), Vida Ginsburg, Mary Meigs, Marie-Claire Blais, Jane Verlaine
First jailed: Protesting nuclear testing in New York in 1962. In 1964 she took part in the Quebec-Washington-Guantanamo Walk for Peace, which attempted to combine a protest against America’s Cuba policy and civil rights (Deming said “the two struggles—for disarmament and negro rights—were properly part of one struggle,”) and was jailed in Georgia, inspiring her first book, Prison Notes (1966). Her last arrest was in 1983 at the Seneca Women’s Peace Encampment.
Biography: A Saving Remnant: The Radical Lives of Barbara Deming and David McReynolds, by Martin Duberman (2011)
Papers at: Harvard
We love her for: Her second book, Running Away from Myself: A Dream Portrait of America Drawn from the Films of the Forties (more on that here); and for the Money for Women Fund she started in 1975 with just a few thousand bucks. Later she kicked in insurance money from a bad auto accident and an inheritance from her aunt. It is now the Barbara Deming Memorial Fund, and makes grants to feminist women in the arts. Once notable for having no website, email, or phone number, you can now find info about the fund online at demingfund.org.
Connections to other Barbaras: Barbara Grier’s Naiad Press published a collection of Barbara Deming’s essays, letters, and poems, Remembering Who We Are in 1981.

Barbara Gittings
July 31, 1932 – February 18, 2007
Came Out: On the picket line in 1965. You’ve seen the photo; she’s the one in the shades and stripey dress holding a sign that demurely suggests “Homosexuals should be judged as individuals.”
Main Cause: Gay Rights, especially when it came to confronting the church, state, and medical establishment
Hung Out With: Frank Kameny, Del Martin & Phyllis Lyon, Alma Routsong AKA Isabel Miller,
Partner: Kay Tobin Lahusen
Appeared on: the Phil Donahue Show, the David Susskind Show
Praise from others: “What do we owe Barbara? Everything.” (Matt Foreman, Executive Director of the National Gay and Lesbian Task Force)
Memorial Awards: Every year the ALA gives the Barbara Gittings Award to the best gay or lesbian novel. GLAAD gives the Barbara Gittings Award to a pioneering individual, group or community media outlet that has made a significant contribution to the development of lesbian, gay, bisexual and transgender media.
Biography: Barbara Gittings: Gay Pioneer by Tracy Baim with Kay Lahusen
Papers At: The New York Public Library.
We Love Her: Because she flunked out of Northwestern for spending all her time in the library researching homos. Because she asked the Daughters of Bilitis the question that has occurred to all of us: why give a lesbian organization such a crazy, obscure name, difficult to pronounce and spell, which references a fictional bisexual character invented by a gay Frenchman? Because a psychiatrist told her at 17 that she could be cured with treatment, and a couple decades later she told the American Psychiatric Association that homosexuality was not an illness.
Connections to other Barbaras: Corresponded extensively with Barbara Grier whom she preceded as editor of The Ladder. 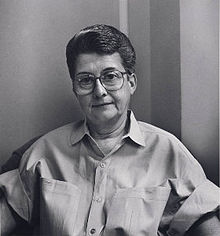 Barbara Grier
November 4, 1933-November 10, 2011
Came Out: At age thirteen, to her mother, after a day of research at the library.
Main Cause: Lesbian Literature
Hung Out With: Jeanette Howard Foster, Jane Rule, Barbara Gittings, Katherine V. Forrest, Ann Bannon, Claire McNab. Penpals with many more.
Girlfriends: Helen Bennett and Donna McBride (whom she married when it became legal).
Stole or Liberated (the controversy continues): The mailing list for The Ladder from the Daughters of Bilitis while the organization was in decline. She turned The Ladder into a short-lived independent publication and later used the mailing list to jumpstart Naiad Press.
Biography: See above
Papers At: The San Francisco Public Library
We Love Her: Because she was a curmudgeonly, socially awkward, autodidact who was obsessed with one thing: books with lesbian characters. Because while writing in The Ladder under the name Gene Damron she was responsible for some of the earliest reviews of lesbian books from a lesbian point of view. Because with Naiad Press she singlehandedly created a subgenre of lesbian literature, while also putting out reprints of The Price of Salt and Sarah Schulman’s first novel. Because she did much of this while working a series of boring clerical jobs and managed to live as an out lesbian in Kansas City, Kansas, Bates City, Missouri, and Tallahassee, Florida.

We miss you, Barbaras, and need more like you.